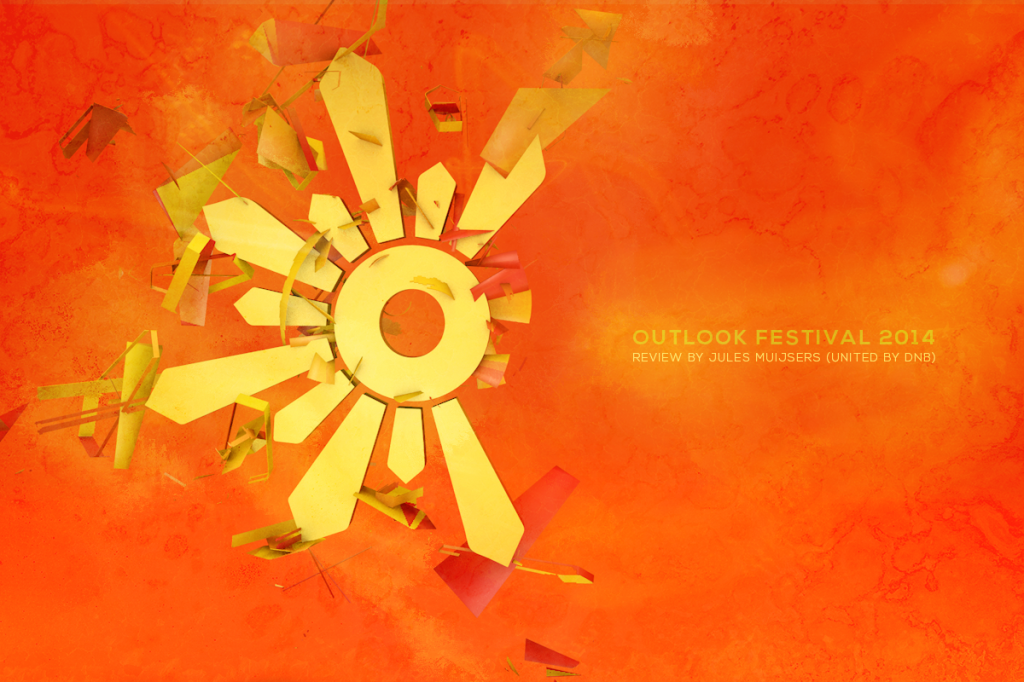 So here’s my review of Outlook festival 2014. Outlook gave me the opportunity to experience this festival at its fullest and shoot some great footage for my documentary. I will take you trough my journey to Outlook, experiences to remember, acts that I will never forget and memories that forever will be in my thoughts.

Set in an abandoned Roman fort, a dungeon, a moat and a harbor in sunny Pula, Croatia. Outlook doesn’t disappoint on its location. It’s simply a beautiful setting for a festival, and it’s great seeing all the different areas combine into a beautiful place where people unite for the sake of enjoying music and their life. With a location like this I feel Outlook puts itself out from other festivals, and I have to say I’m sure it added something extra to the whole experience. 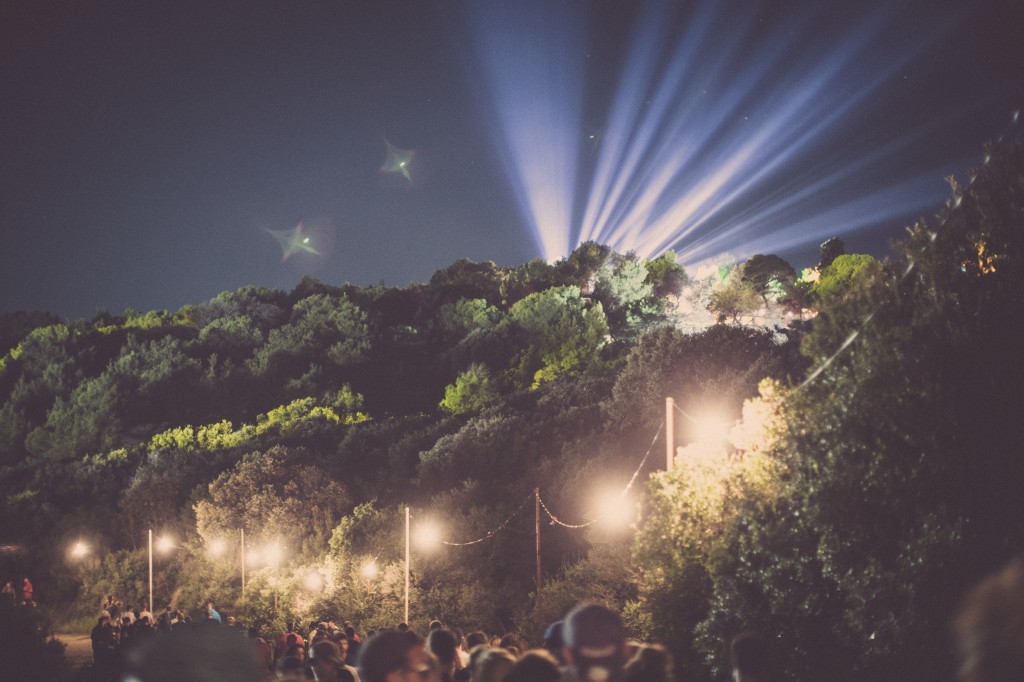 In my journey from Prague to Pula by train (somewhere in Austria) I met a lot of other people who where also going to Outlook, and joined them in the overfull train sitting on the floor until other wagons where added and I got a good seat for some needed rest. Waking up early in the morning to change train at Bratislava towards Pula. We arrived at 10.30 am in Pula. Before walking towards the festival I got some nice views of the beautiful city. When I started walking to the festival it started raining, and I kind of walked off track to get at the location, I was happy to arrive and got in smoothly. Set up my tent and chilled for a bit while it was raining, hoping this weather isn’t going to be like this for the next couple of days. 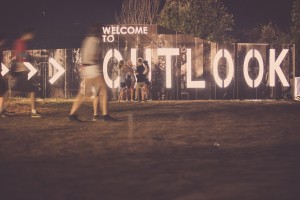 In the evening the weather got better and the pre partying could start. The pre parties take place at the beach, and also there’s a bar at the camping where they play music (remember seeing someone virtual dj with his laptop surrounded by people dancing and hyping the dj up). Being on the beach is very beautiful, especially with the sun coming down it gives some really nice views. Also its possible to just dive in the water and cool yourself down in the hotness of Croatia. At the pre party you can feel the energy and hype for the next upcoming days which is great and makes you look forward to the start of the festival, even more. 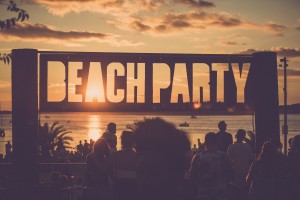 After 2 days of pre-partying and acclimatizing at the camping we’re all ready for the festival to officially start. I was glad to be able to attend a boat party thanks to Outlook festival, which was really cool to party with a lot of people on the Adriatic sea. It wasn’t really for me as I’m not good in drinking on the water and like my space to move on the beats.

The area’s open at 8 pm which I think is a great time to start. It gives you some time to just chill during the warm afternoons at the beach with some music, the camping or explore Pula. There’s enough to do. Besides.. raving for 10 hours a day is quite enough. 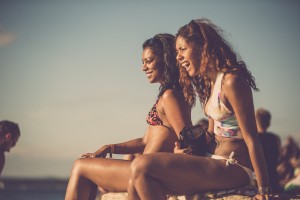 I took some time to explore the festival site and all the areas it contains at first. The festival site is quite big and is simply beautiful. The stages with all the lights create a really great vibe in this special environment. And at every stage the audience is really nice and energetic which only adds even more to the experience. I got stuck for some time at the ballroom listening to The Illuminated who are also from The Netherlands, and were really good.

The first official day I spend most of my evening/night at “The Clearing” for Dj Marky & friends. To bad Calibre wasn’t there (+ Dj EZ), and the replacement wasn’t really something I liked. But it gave me some time to step at the harbour with Iration Steppas & Kenny Knots, and later Radikal guru. Best performances that night for me where Dbridge & SP:MC (who I think still brings a really original approach to dnb), S.P.Y & Mc Lowqui (who did a really great set).

Woke up fairly early because I was sweating out of my tent, got some breakfast at one of the food stands (lots of choice here). Took a shower in my swimming shorts outside (as I didn’t feel like standing in the queue for a long time for the actual shower) and walked to a small local shop to buy some beer (as buying drinks only on the festival site can get quite expensive) and other groceries.

The rest of the day till the evening I spend chilling at the beach and meeting new people at the camping, drinking and enjoying ourselves. And this was pretty much every morning and afternoon for me at the festival, really nice.

During the day I also spend some time at the Press & media area, which was nice to relax, charge all my gear and put videos on my hdd. A lot of the eu power points where taken(comparing to uk power points), so maybe a bit more of those next year?

The 4th day was a day of hiphop beats and drum and bass for me running between the harbour, the void & the moat. I was disappointed Onra & Busta Ryhmes weren’t there, but it couldn’t ruin my night cause it was still full of great acts. Action Bronson as replacement wasn’t for me and the moment I found out I walked straight back to the Moat. When I got there, there was such a long queue to get in that I just enjoyed the set from Dub Phizix b2b Skeptical feat strategy on the upper level looking down on the crowd lucky enough to be in the Moat. The moat is a special area as your surrounded by high walls in front off a sound system, perfect to experience the sound even more. Performances to remember for me where Flako, Andy C & mc GQ, Friction & MC Linguistics, Quadrant & Iris and Dub Phizix b2b Skeptical feat strategy. 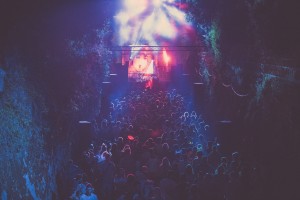 The 5th day I basically spend almost all the evening at The void, for the Shogun audio night, where the atmosphere was amazing. Also I went to Dj Premier at the Harbour stage, which was really special to me, as I love Hiphop and Dj Premier is like the godfather of hiphop. Other special acts that night for me where: DLR & Icicle.
I also had an interview with the organizers of Outlook festival this day which was really great, finding out some info behind the festival and meeting the inspiring people behind it.

The last day (6th) was a special Metalheadz day for me, with the Metalheadz history session. As a drum and bass lover it was so good for me to experience all these different styles in dnb for all these days. Seeing old heroes like Doc Scott, Dillinja, Goldie, Grooverider & Randall was just great. Nostalgic is probably the best word to describe it for me. The atmosphere was amazing this night, thanks to all the junglists ☺ 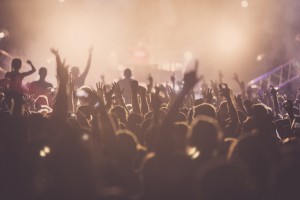 After a great last day, the festival officially ended at 6 am. And I walked back to the camping to catch a couple hours off sleep before I had to get further with my trip. I got back on the off track route and when I reached a road again I actually ended up getting a lift by a really nice local who also went to Outlook!

All in all this festival was a great experience, the music and sound systems where so good, the people where awesome and the location and weather was great. Also big ups to the festival crew, security, volunteers and artists for doing a great job. For the years to come it would maybe be nice to attract more people from around the world (as a lot of the audience is from England). But I see this happening with the Outlook launch parties already in so many different places, putting out talent from across the world, its wonderful. Also it would be nice if there where shuttle busses (from train station and back) as I felt the busses in Pula where quite shit, and with taxi’s you’ll easily be ripped off. These busses also would be a great opportunity to get to the opening party at the amphitheatre more easily or for people to check out the center of Pula.

Check out the highlights video by Family creative!

This work by admin is licensed under a Creative Commons Attribution-NonCommercial 4.0 International

Any cookies that may not be particularly necessary for the website to function and is used specifically to collect user personal data via analytics, ads, other embedded contents are termed as non-necessary cookies. It is mandatory to procure user consent prior to running these cookies on your website.

We use cookies to ensure that we give you the best experience on our website. If you continue to use this site we will assume that you are happy with it.Ok